After 123 Days in the NICU, Baby is Reunited with his Parents 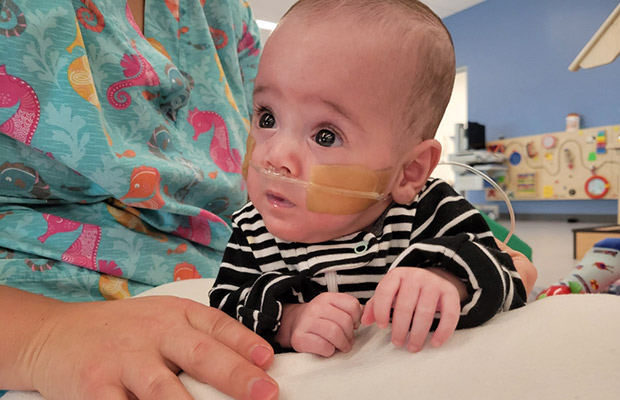 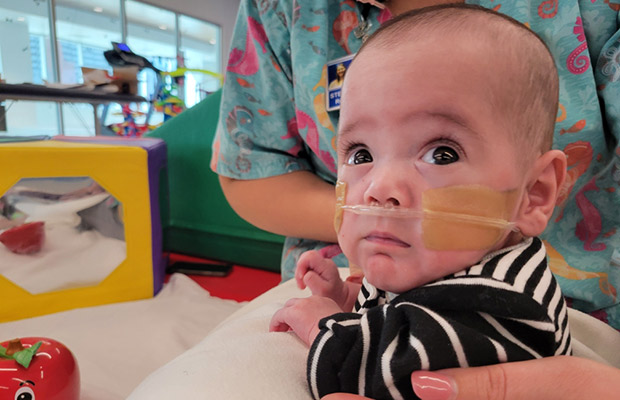 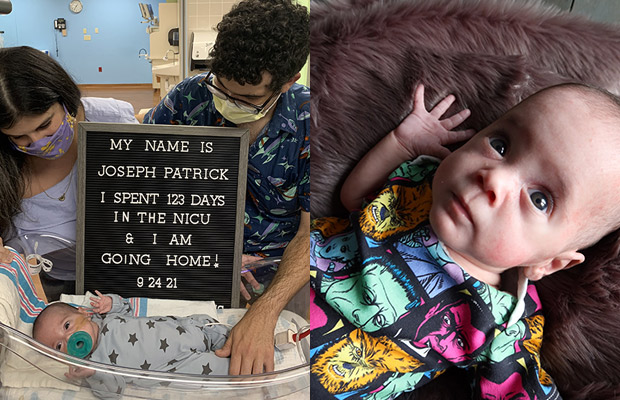 When Patricia Fusco and Katrina Wegmann were in high school, Patricia shared that she would not be able to carry and birth her own children. Unbeknownst to Patricia, Katrina decided then that if she was able to when the time came, she would be a surrogate for her friend.

Little did they know that more than 20 years later, not only would they still be close friends, but their husbands would also be best friends. And when Patricia and her husband, Andrew, had trouble finding a surrogate, Katrina stepped up.

Katrina, who already had two children of her own, expected it would be “another easy pregnancy and it would be able to make them a family.”

The pregnancy turned out to be anything but easy. Twelve weeks into her pregnancy, Katrina’s blood pressure was high — something she’d never experienced before, causing the pregnancy to be considered “high risk.”

Turning to Jackson for High-Risk Care
As the pregnancy progressed, Patricia, a senior specialist for community outreach and events at Jackson Health System, asked Katrina to consider meeting with the Maternal Fetal Medicine team at Jackson Health System. Every year at work, Patricia plans multiple events, including the NICU reunion, where babies who were saved and cared for at the Holtz Children’s Hospital Neonatal Intensive Care Unit (NICU) are reunited with their medical teams.

“I know that Jackson treats over 50 percent of South Florida’s high-risk pregnancies and that the Holtz Children’s Hospital NICU is one of the largest and best in the nation,” she said. “Working at Jackson, I hear the miracle stories all the time. But you never think you’re going to be one of those miracle stories.”

Patricia called Tudela “a gift to his profession.”

“He’s probably the best doctor I have ever had the pleasure of meeting,” she said. “Everyone on the team invests themselves wholeheartedly in each patient’s case.”

When Katrina was 23 weeks pregnant, she suffered from terrible headaches, and her blood pressure was extremely high. She was admitted to the hospital and told she would need to remain there on bed rest to try to prevent an early delivery. That meant a possible two-to-three-month hospital stay – a stressful complication since she had two small children at home. Later they would confirm she had preeclampsia, a potentially dangerous pregnancy complication associated with high blood pressure.

A Difficult Choice
Two weeks later, a routine ultrasound showed that the baby was not growing and there was concern with the placenta, which was no longer providing critical nutrition to the baby. Dr. Tudela told them to consider delivering the baby early because he did not know if the baby would survive otherwise. Patricia, Katrina, and their husbands came together to make the difficult decision.

“That was a terrifying day for us, probably one of the most emotional days,” Patricia said. “Ultimately, we trusted the Jackson NICU enough that we preferred to deliver him then, rather than seeing what could happen if we tried to keep him in utero.”

On May 27, 2021, at 25 weeks and five days gestation, Joseph Patrick, nicknamed JP, was born weighing just 1 pound 4 ounces. Quickly, doctors told the Fuscos that they made the right choice as there was no more amniotic fluid in the sac, and the baby would not likely have survived if they had waited.

As soon as the Fuscos saw their baby in the NICU, they felt more at ease.

“When we saw him, I thought, ‘they’ve got this,” Patricia said. “Once he was stable in the NICU, things began to feel safe. And every step of the way from that day forward, the doctors, nurses, therapists, everyone at every level always kept us abreast of what was going on.”

The NICU Village
JP thankfully had no brain bleeds and a fairly smooth ride in the NICU, with some breathing complications and an unknown infection during his stay. He remained in the NICU for 123 days.

“They say it takes a village [to care for a child], and I can wholeheartedly say there is no better village than the NICU village at Holtz Children’s,” Patricia said.

During JP’s stay, Patricia and Andrew said they were a part of every conversation regarding his care and the nurses became their friends, confidants, and teachers.

In addition to the expert and compassionate care that both Katrina and JP received, Patricia said she is grateful that everyone at Jackson treated their uncommon situation as if it were an everyday occurrence.

“We had a unique situation because we were high-risk. It was also unique because it was a surrogacy, and we were two friends going through this together,” Patricia said. “We know that our situation is not common. It definitely is not something they see every day. But every single physician, every single healthcare worker, never batted an eye at us. Everyone treated the experience with understanding and compassion. I don’t know if that would have been the case at another hospital.”

In September, after a nearly four-month NICU stay, JP was able to go home.

“It was a relief to finally be able to walk out of those doors with our son,” Patricia said. “It felt like an accomplishment.”

A Special Bond
JP continues to grow and thrive but is closely monitored by doctors and specialists to make sure he’s developing and that no more complications arise. Patricia and Andrew are now enjoying what they call a more “normal” stage of parenting.

“We’ve already seen him grow from a fragile 1-pound infant to a robust, beautiful baby boy,” Andrew said. “Now I’m looking forward to watching him hit those milestones, not only growth and developmental milestones but the little kid moments that define a childhood.”

And Katrina is happy that she will be there to witness it all. While they still need to be careful about visits due to the pandemic, the families are closer than ever.

“I talk to my kids about JP all the time, and they can’t wait to spend time with him. I look forward to them growing up together,” she said.

“We are eternally grateful to her,” she said. “There are no words or ways we could ever adequately repay or thank her for what she has given us.”