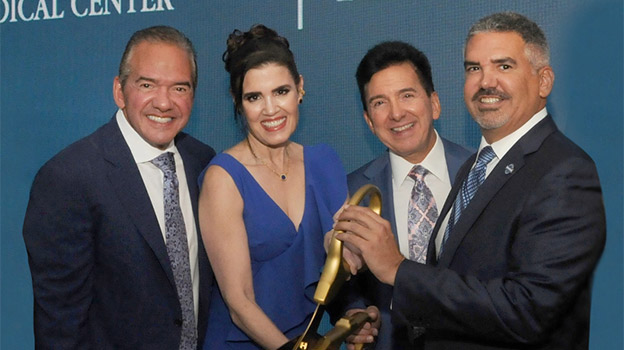 – Milton Memorial will expand access to care for more than 500,000 residents in west Miami-Dade –

“The new facility is remarkable for so many reasons,” said Flavia Llizo, co-president and chief development officer of the Jackson Health Foundation. “Not only is it architecturally beautiful, but it will help deliver Jackson-quality healthcare to the people of communities in west Miami-Dade, including Doral, Miami Springs, Sweetwater, and Hialeah, who have waited far too long to have a hospital of this caliber in their own backyard.”

Jackson Health System broke ground on Milton Memorial in 2017 with a generous $10 million donation from the José Milton Foundation in honor of the family patriarch José Milton, a well-known businessman who became passionate about Jackson after experiencing first-hand its high-quality level of care. José Milton’s three sons, Cecil, Frank, and Joseph, his daughter-in-law, Ana VeigaMilton, and several members of the Milton family attended the ribbon-cutting ceremony.

“For many years, the Foundation’s programs and initiatives have helped bring hope, healing, and a second chance at life to patients and their families throughout the Jackson system,” said Ana VeigaMilton, chair of the Jackson Health Foundation Board of Directors, and president of the José Milton Foundation. “The entire Milton family looks forward to continuing to support Jackson West as it roots itself in our community. Like all of the Jackson facilities, I look forward to José Milton Memorial Hospital becoming a beacon of hope for patients in need.”

Jackson West, opening today, August 2, combines consumer-centered outpatient facilities – including emergency services for adults and kids, a full range of diagnostic and imaging suites, and physician clinics for adult and pediatric specialists – with the latest surgical and inpatient programs at Milton Memorial. Every aspect of Jackson West is designed around the patient, including easy-to-navigate facilities, passionately engaged caregivers, an academic partnership with the University of Miami Health System, and clinical services tailored to serve people in nearby communities.

“As Miami-Dade County’s safety net hospital, Jackson provides care to everyone who walks through our doors, regardless of their ability to pay,” said Llizo. “That is why the support of donors like the Milton family, the Arison family, and our corporate partners is so critical and means so much to Jackson. It allows the health system to build facilities like this and bring access to quality medical care to communities in all corners of South Florida.”