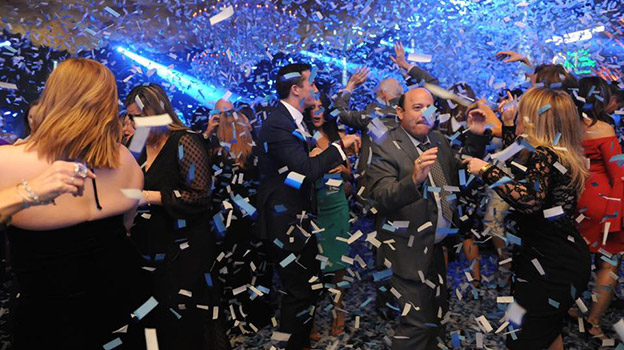 The sold-out event brought more than 600 philanthropists and community leaders together for a spectacular evening of giving. Over $2 million was raised during the event which was again hosted by WPLG Channel 10 news anchor Laurie Jennings. This year, Fana Holtz, naming benefactor of Holtz Children’s Hospital and Silvia Rios Fortun, a member of the Foundation’s Board of Directors, served as chairs of the gala.

During the evening, the generosity of the gala’s three honorary co-chairs – Ken Gorin, Roberta and Harvey Chaplin and Janie and Ron Kupferman – was spotlighted. Each of the honorary chairs gave a significant gift for the celebration. A raffle for a 2019 Audi A6, donated by Ken Gorin and THE COLLECTION, was a highlight of the event. Beatriz Ramoutarsingh, of the Hope of a Miracle Foundation in Trinidad and Tobago, was the lucky winner. Wine and spirits for the celebration was donated by Southern Glazer’s Wine & Spirits, the evening’s Grand Corporate Underwriter.

The event featured walls depicting “The Future of Jackson” that showcased priority expansion projects and significant achievements. Four priority expansion projects were highlighted including – the construction of the Christine E. Lynn Rehabilitation Center and Jackson West in the City of Doral; the enhancement of programs and initiatives at Holtz Children’s Hospital and; the expansion of the Miami Transplant Institute.

“The enhancement and expansion of services at Jackson is a priority for our community,” said Keith R. Tribble, Jackson Health Foundation President and CEO. “Every day, thousands of people in Miami-Dade County depend on Jackson Health System. It’s a safety net for them and the generous support of our donors and corporate sponsors makes it possible for the Foundation to continue supporting the health system in their mission to make miracles happen every day for patients in need, regardless of their ability to pay.”

Singer Loren Allred performed “Never Enough”, a song she recorded for the soundtrack of the hit movie musical “The Greatest Showman”. She was also featured on Season 3 of the popular show The Voice and can be heard on Michael Bublé’s latest album.

Jackson Health Foundation is the fundraising arm of Jackson Health System, seeking private philanthropic support to fund the system’s greatest needs. For more information about the gala and a complete list of sponsors and benefactors, please visit www.JacksonHealthFoundation.org.

Jackson Health Foundation, a 501(c)(3) organization, is the fundraising arm for Jackson Health System, the most comprehensive healthcare provider in South Florida and the largest public hospital in the country. Through the generosity of compassionate donors, the Foundation seeks private philanthropic funds to improve the System’s facilities, provide the most advanced equipment and technology, and support its priority projects. The Foundation’s fundraising efforts allow Jackson Health System to provide life-saving medical care to all of its patients, regardless of financial need, and improve health care delivery, enhance the hospital experience for patients, and promote wellness and preventive medicine. Jackson Health Foundation offers several fundraising programs, including the Golden Angel Society, the Foundation’s premier giving society; Guardian Angels, who are dedicated to supporting Holtz Children’s Hospital; International Kids Fund Wonderfund™, a global outreach program that provides medical care to children from around the world who cannot be treated in their home countries; and the Young Angels Program, for individuals ages 21-45, who believe that participation in civic engagement activities is vital to the health of their community. Founded in 1991, the Foundation is governed by a volunteer Board of Directors committed to philanthropic activities that, to date, have raised over $140 million to benefit Jackson Health System. For more information about Jackson Health Foundation, please visit www.JacksonHealthFoundation.org or call 305.585.GIVE (4483).