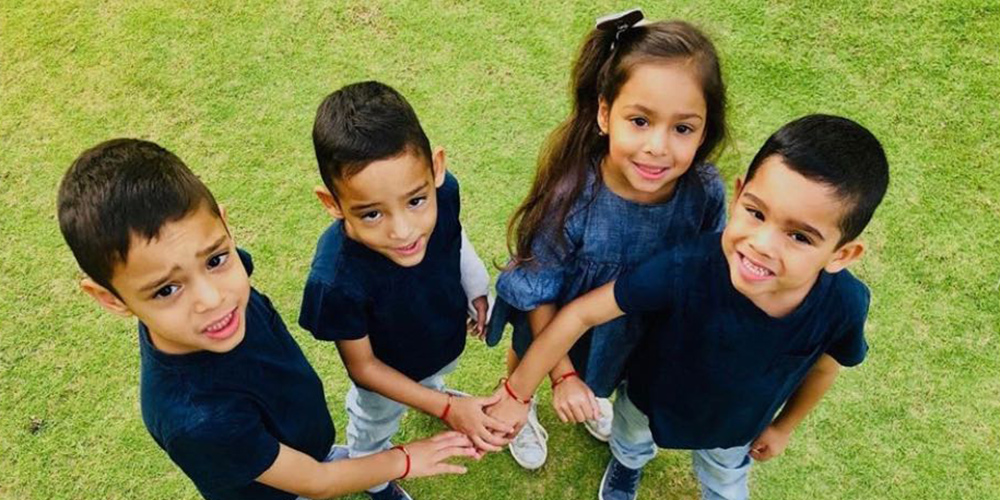 In February 2014, Ivanna Cardenas Gutierrez was excited to learn that she was going to be a mom. When she and her husband, David Gutierrez, went to the doctor to confirm her pregnancy, they received an unexpected surprise.

“The doctor said we were having twins – and I was shocked,” David Gutierrez said. “Then, he said there were three babies. Two minutes later, he said there was a fourth. I was speechless.”

The couple conceived quadruplets naturally, an extremely rare occurrence that happens in just 1 in 700,000 pregnancies. Approximately 90 percent of quadruplets are conceived with the assistance of medical technology.

Ivanna, 27, turned to Salih Yasin, M.D., a University of Miami/Jackson obstetrician/gynecologist who specializes in high-risk pregnancies and the delivery of multiples, to care for her throughout the pregnancy.

The pregnancy was going smoothly and Ivanna was feeling great when she went in for her 27 week check-up. But tests revealed that one of the babies was not getting enough nutrients and was at risk of dying. A decision was made to deliver all of the babies that day, August 18, 2014 – three months earlier than their November 15 due date.

A multidisciplinary team of specialists, including doctors to care for Ivanna, and neonatologists to care for the newborns, staffed the operating room at Jackson Memorial Hospital for the emergency Cesarean section. In less than two minutes, Dr. Yasin delivered three boys and one girl—Julian, Sebastian, Gabriel, and Francesca. Julian, the largest, weighed 2 pounds, 3 ounces, while Gabriel, the smallest, weighed 1 pound, 3 ounces.

The babies were under the care of a team of neonatologists at the Schatzi Kassal Project: New Born Neonatal Intensive Care Unit (NICU) at Holtz Children’s Hospital, where they continued to grow and get stronger until they all came home.

“There have been a lot of ups and downs, but we have gotten through it,” Ivanna said. “We know how blessed we are.”